This post is part of a series of posts about CloudRAID. The predecessor can be found in Markus Holtermann’s blog and the successor here.

The application has to meet several requirements. At first there are data-security, data-safety and data-availability derived from the weaknesses of cloud storage services (see chapter 2.2 Cloud on page 4). Since CloudRAID is supposed to be a cloud backup solution there does not have to be a complex synchronization functionality as it is provided by several cloud storage solutions.

A typical three layer architecture was considered the best solution. The persistence layer is an aggregate of three cloud storage solutions as a RAID 5 unit. The application layer is an application running on a server that provides a simple Representational State Transfer (REST) Application Programming Interface (API) to the presentation layer. The connection to the persistence layer is realized via API calls to the cloud storage services’ web service interfaces. On this layer the RAID functionality is implemented and also the encryption of the files. For security reasons the application layer and the presentation layer should communicate via SSL/TLS encrypted lines. 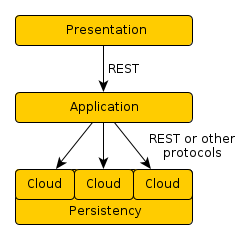 The application layer needs a local14 storage for meta information about files. This information can be used to effectively find RAID5 chunks on different storages. The user may also want to have access to the information of the files’ back-up dates etc. The presentation layer is a simple Graphical User Interface (GUI), Command Line Interface (CLI) or maybe a website. It wraps the REST API and presents the result of different REST calls to the user.

The advantage of this approach is that it is easier to react to changes in the APIs of cloud storage providers. Since one server can handle different clients and their access to the cloud storages, only the server instance has to be updated to the latest API version. The client software does not have to be updated. Additionally, users can simply access their backups from different end user equipment and from different locations. For this one only needs to establish a connection to the second layer server and not to three cloud storages. Another advantage is that the user equipment only has to transfer the “normal” amount of data to back up a file. A solution where the client software transfers the data directly to the cloud storage servers on its own would cause about 1.5 times more data traffic. But this argument only counts for mobile devices that have a slow Internet connection and may be charged for consumed traffic.

A first concept for the server’s general architecture based on OSGi. Several bundles were defined to give a good modularity (see Figure 10).

Figure 11 on page 19 shows the actual architecture of the server application on OSGi bundle level. 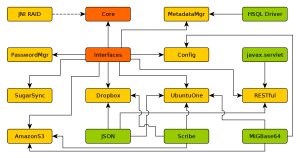 Figure 11: Actual server architecture. “A → B” means that A is statically imported by B. Since the RAID implementation is not a real bundle the line is dashed.

The different interface bundles were joined together to one single bundle to reduce the number of bundles. Since interfaces have in general a very small file size using a bundle for every interface would only cause a lot of – administration and file size – overhead. The Core bundle does not implement the connection functionality to the cloud storages any more, but uses IStorageConnector services to do so (see next section). Additionally, the dependency between the RESTful API and the Core bundle was inverted: In the first design Core should load the API, but in the later design the RESTful API loads the Core bundle. The configuration functionality was also excluded from the Core bundle and transferred to an own bundle for a higher flexibility. Jersey and Jetty were replaced by javax.servlet to reduce the number of dependencies that have to be administered. The javax.servlet bundle is already shipped with the Equinox OSGi framework whilst Jersey and Jetty have to be downloaded, built, and installed.

For a better understandability Figure 12 on page 21 shows how the Core bundle interacts with the other bundles. Since the architecture diagram above does only show hard dependencies this graphic explicitly shows soft dependencies. The red rectangular boxes with italic text are Java interfaces from the Interfaces bundle. The Core bundle loads different services via the OSGi registry. One is a ICloudRAIDConfig service that is implemented by the Config bundle. The IMetadataManager service is provided by the MetadataManager bundle, the IPasswordManager service is implemented by the PasswordManager bundle. Important is that Core loads three IStorageConnector services. Regarding services are provided by the different storage connectors. CloudRAID can use three times the same service (which is not the intention of CloudRAID). It can also use twice the same service and another service as the third one (which also annihilates the advantages of CloudRAID). The best setup is to use three different services (for example Dropbox, UbuntuOne, and AmazonS3). The services used can be controlled via the Config bundle. The only package that is not indirectly loaded by Core via a service is the RESTful bundle. This bundle loads the Core bundle as a service. To be able to do so Core imple- ments the ICoreAccess interface from the Interfaces bundle. The dependency between those two bundles was implemented in this direction because a dependency in the other direction (Core loads RESTful) would make less sense. Core does not have to know the RESTful API or other APIs that provide access to Core, but RESTful needs to know the Core service. By using this kind of dependency it is possible to easily operate two or more APIs at the same time that access the same ICoreAccess service. 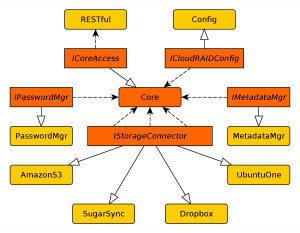 Figure 13 on page 23 shows a more detailed view of the storage connectors respectively their dependencies since the diagrams above does not show all relevant soft dependencies between the bundles. Every bundle providing an IStorageConnector service implements the regarding interface from the Interfaces bundle. The DropboxConnector, UbuntuOneConnector, and the AamazonS3Connector additionally require third level bundles. Every storage connector loads the Config service using the OSGi registry. Without the Config service the startup of the storage connectors would fail since the storage connectors need to know API access tokens, user names, and passwords to be able to log in – for security reasons and portability they should not be hard coded in the bundles. As showed in listing 1 on page 22 every IStorageConnector service has to implement eight methods. The create() method is called first – it gets the configuration parameters and checks, if all prerequisites are fulfilled. The connect() method executes the actual login to the cloud storage service and retrieves for example access tokens. The disconnect() method is not necessary for the currently supported cloud storages but is thought for services that support logging out from a service. The upload() method creates a new file on a cloud storage, if and only if (iff) the file is not already on the cloud storage, while the update() method uploads a new file version, iff the file is already on the cloud storage. get() returns an InputStream that reads a file from a cloud storage while getMetadata() reads file metadata. delete() removes a file from a cloud storage.